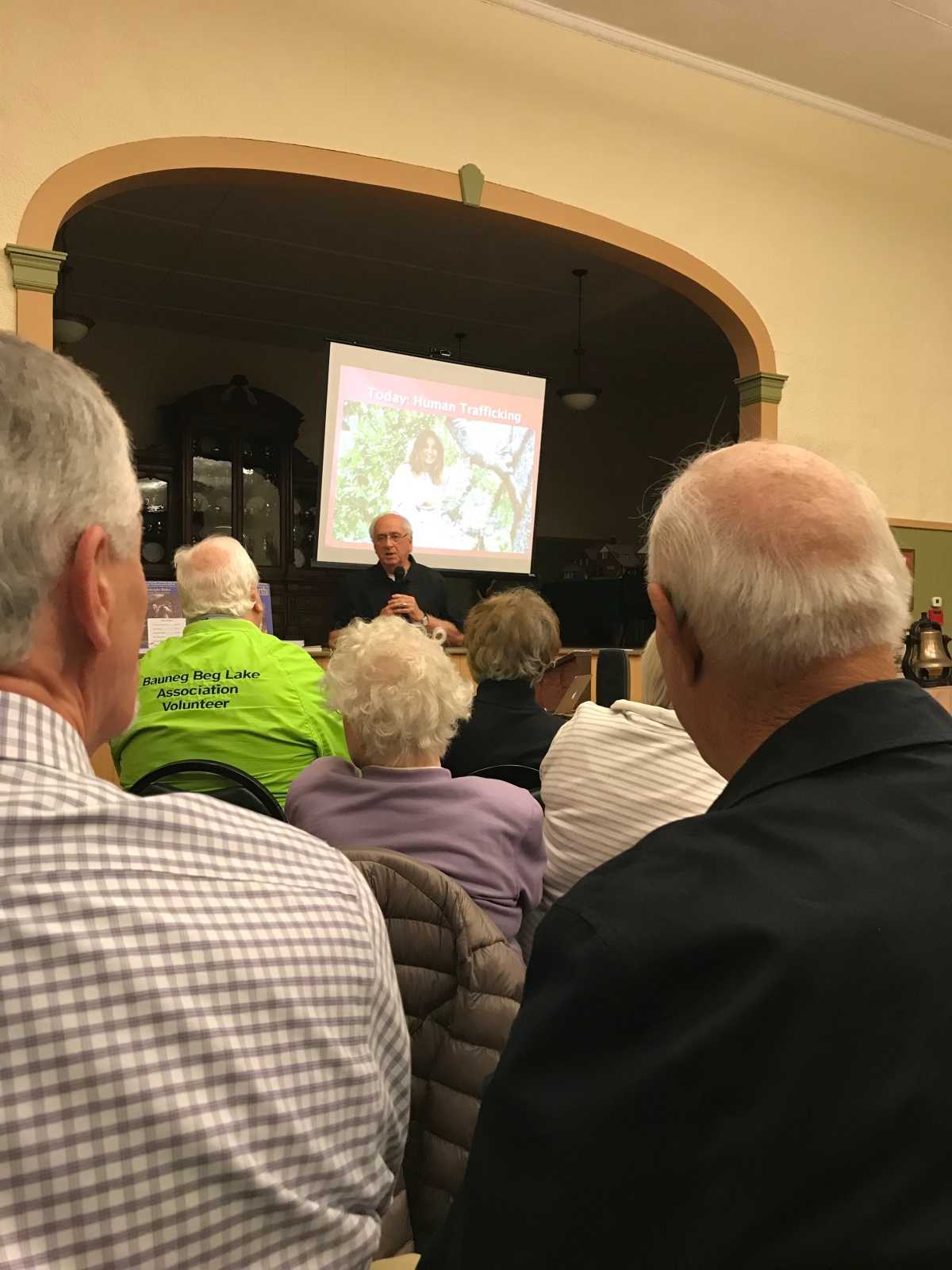 While archaeologists (like Dr. Kat Cardover in three of my contemporary novels) dig underground for clues of cultures past, as I speak around Maine about the Underground Railroad of the 1860s and the Ku Klux Klan of the 1920s, I’m finding a treasure troth above the ground: living, breathing people.

My “digs” are in libraries, historical societies, cultural centers, churches, homeschool conferences, and even a yacht club. And my “archaeological finds” are the attendees’ stories.

Sometimes the most fascinating history isn’t found in a book by Doris Kearns Goodwin (about American presidents), or Leo Tolstoy (the Napoleonic wars), or Robert Graves (I, Claudius).

Sometimes the source is our friends and neighbors and audiences.

It’s a letter from a soldier to his wife, discovered in 2017 in a hidden room at their farm in Palermo, Maine. It’s an aged dissertation written by the son of a Southern plantation owner trying to affirm the righteousness of his now-lost cause.

Yes, while textbooks fail us, oral history seeps — unbidden but always welcome — out of the most wonderful, obscure hiding places.

The KKK? Perhaps the reason for its absence from Maine history books is the same reason German schools basically whiffed for decades on teaching children about concentration camps. The Holocaust was appalling, reprehensible, shameful, and deadly for six million souls, and they didn’t want to think this way of their ancestors, or even acknowledge such a bleak, evil time in their own country.

Maine schools rarely if ever teach about the brave men and women who put their lives and fortunes in peril to help escaping slaves in the 1800s.

But now is a good time to do so and not simply because of my novel, True North: Tice’s Story. The Underground Railroad is ripe with fascinating, invigorating, uplifting tales.

For other reasons, schools never teach about the Ku Klux Klan’s amazing rise to social and political prominence in the 1920s in the Pine Tree State, where Catholics and Jews were its main targets.

Again, now’s the time to teach this bit of history, and not because of my novel, The Crossing.

Slowly, from our new “archaeologists,” my wife, Loy, and I are adding previously unknown “safe houses” to the amalgam of places along Maine’s trails to freedom in Canada.

Two weeks ago in Skowhegan we were told of safe houses in Norridgewock (to the southwest of Skowhegan) and Cornville (to the northwest), yet none in Skowhegan itself.

Speaking in Pittsfield, a lady in Newport fessed up that she had discovered her grandfather’s KKK robes in the attic and burned them in her backyard. A similar story was told in Biddeford.

Thank you, one in all, for unveiling your previously “buried” mysteries so that we can expand on Maine’s and the nation’s history. 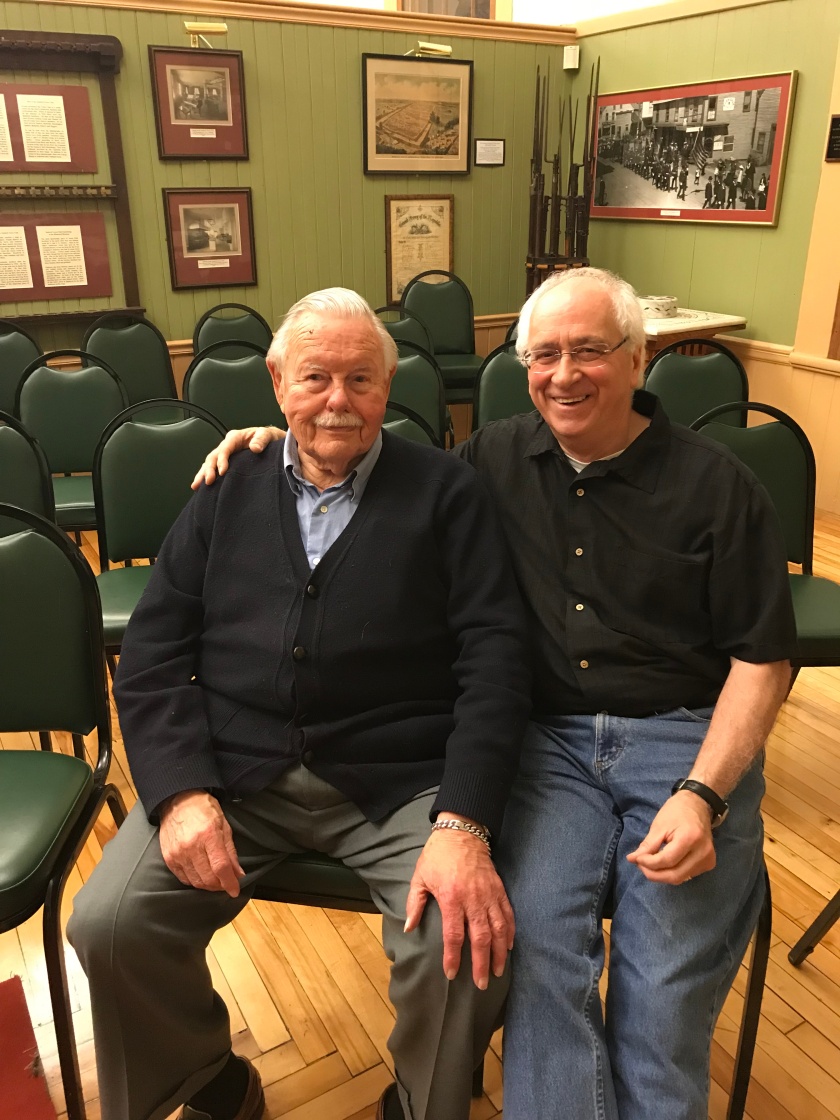 Top Photo: I speak in Springvale, Maine, about the Underground Railroad to a crowd who added three new “safe houses” to our growing list.

Above Photo: Among the group was former U.S. Ambassador Harland Eastman, longtime president of the Springvale Historical Society.

Beginning with my first book, "Midnight Rider for the Morning Star," based on the life and times of Francis Asbury, America's first circuit-riding preacher, I have written three historical Christian novels with another one the way in late 2021, four contemporary geopolitical adventures, an end-times thriller, a devotional, a self-help book for people who have lost their jobs, and two books filled with the best of my interviews with numerous icons of the golf world. I have spoken at Maine's State House, conferences, numerous churches, schools and camp meetings as well as national golf conferences from Florida to California. Having won six national writing awards, I am most proud of my novels: Midnight Rider for the Morning Star (2007) True North: Tice's Story (2013) Chasing the Music (2016) The Crossing (2017) The Three Sixes (2017) The Last Aliyah (2018) Jeremiah's Jar (2018) Torn Asunder (2020) A Cause Most Splendid (2021) My e-books include: Putting a Little Spin on It: The Design's the Thing! Putting a Little Spin on It: The Grooming's the Thing! Fired? Get Fired Up! Walks with God Join me on my web site: www.markalanleslie.com View all posts by markalanleslie

One thought on “History Archaeologists”

This is a text widget. The Text Widget allows you to add text or HTML to your sidebar. You can use a text widget to display text, links, images, HTML, or a combination of these. Edit them in the Widget section of the Customizer.
Loading Comments...
%d bloggers like this: